Just as every mom has the moment she first laid eyes on her child indelibly tattooed on her cortex—you know, the part of your brain that, soon thereafter, spurts out Ohmigod it must be the plague the first time your baby gets a rash, or Ohmigod I can’t believe my precious little sweetheart just belted that kid in the kisser before you’ve even had a chance to open your mouth to deny it. Every mom remembers her first totally, irredeemably, irrefutably Sh*tty Mom Moment.

Mine came when my ‘every-day-is-Halloween’ son was about three, and deeply entrenched in his Cruella De Vil and 101 Dalmatians phase. His aunt got him a Dalmatian-print bathrobe and I scored a replica of Cruella’s little handbag from the Disney Store, and we went to the local costume emporium for a long cigarette holder to complete the look. My son instantly spied the fake cigarettes hanging between the plastic puke and whoopee cushions. “Look, Mommy!” he shouted. “You have to get them for me. Please, please, pul-eeze! Cruella is always smoking! I neeeeeed them!” 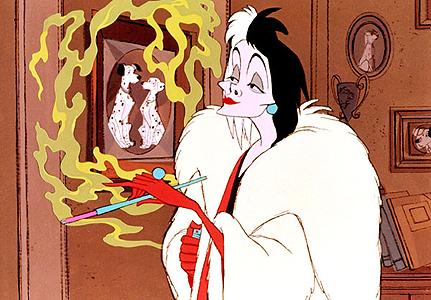 So I caved. He was in raptures as he puffed away on our way home and I was laughing to myself, especially at the double-takes given to us by jaded New Yorkers who’d somehow never seen a pint-sized fake-fur freak “smoking” on 4th Avenue before. Which is when a police car cruising by came to a dead stop. The cop leaned out the window.

The cop evidently had not seen the film. “Hey lady,” he said sternly to me. “Is that a real cigarette?”

If I’d been a truly Sh*tty Mom, I would have said, “Well, yeah, but usually he prefers Marlboro Lights,” but as I was just a Sh*tty-Mom-in-Training, I said, “Are you kidding me? Of course not!”

He rolled his eyes and shook his head and sped off. What are you doing? I asked myself. I’d been reveling in my son doing something that he loved, even though I could tell from the looks many passersby had thrown at me that they thought I was nuts–some, like that cop, had taken a quick glance and from their instant frown, had actually thought I’d given a toddler a real cigarette. Silly me. I thought it was hilarious. Other moms, sheesh, did not.

And then I realized I really didn’t care what they thought. My son was happy and so was I.

Which is when I realized that I was a Sh*tty Mom after all.

A Sh*tty Mom knows that it—the universal “it”—happens to everyone. What makes you truly Sh*tty is being able to laugh at it even while you’re cleaning up the mess.

Fast-forward to now, when the Sh*itty Mom moments come flying at you so quickly as your kids get older that you often don’t have time to catch your breath. Like the time your sweet little cherub is teaching a catchy song to her friends and then you realize she’s spouting lyrics with words you didn’t know existed until you were in college. Or the time the vegan mom caught you lying about the “tofu” hot dogs you made for lunch when her kid was over for a playdate.

When that happens, I just smile and apologize and move on. If the other moms think I’m faking, well, um, okay, so maybe sometimes they’re right! In the scheme of my life, does it really matter? No it does not.

Which is why, over the years, my coauthors and I gradually developed the rules that we filtered through a humorous colander for our book. Here are a few of the basics if you’re on the fence about being a Sh*tty Mom: 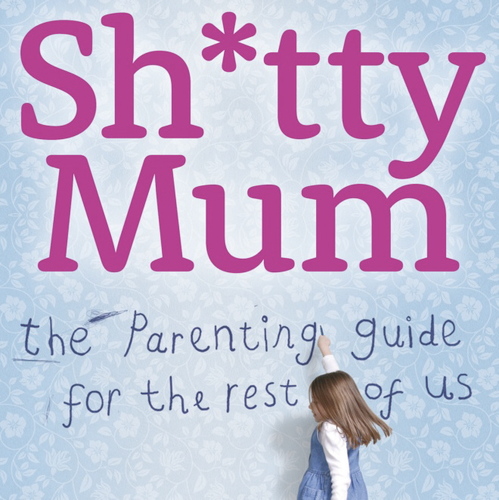 In other words, try to let it go, just a little bit. Make your own rules and stick to them. Trust your own instincts.

Also, try not to hover too much. If you find this a struggle, allow me to tell you what it was like back in the pre-digital Dark Ages when I was little. My sisters and I got home from school. The sitter was too busy watching her soap operas to get up. “Go out and play,” she ordered. So we did. No one knew where we were. No one checked in. No one worried. When my dad got home from work, he used that magical pre-digital form of communication known to all in our neighborhood as the Get Yer Butts Home for Dinner Right Now Whistle. Somehow, we all managed to survive without call-waiting and GPS. 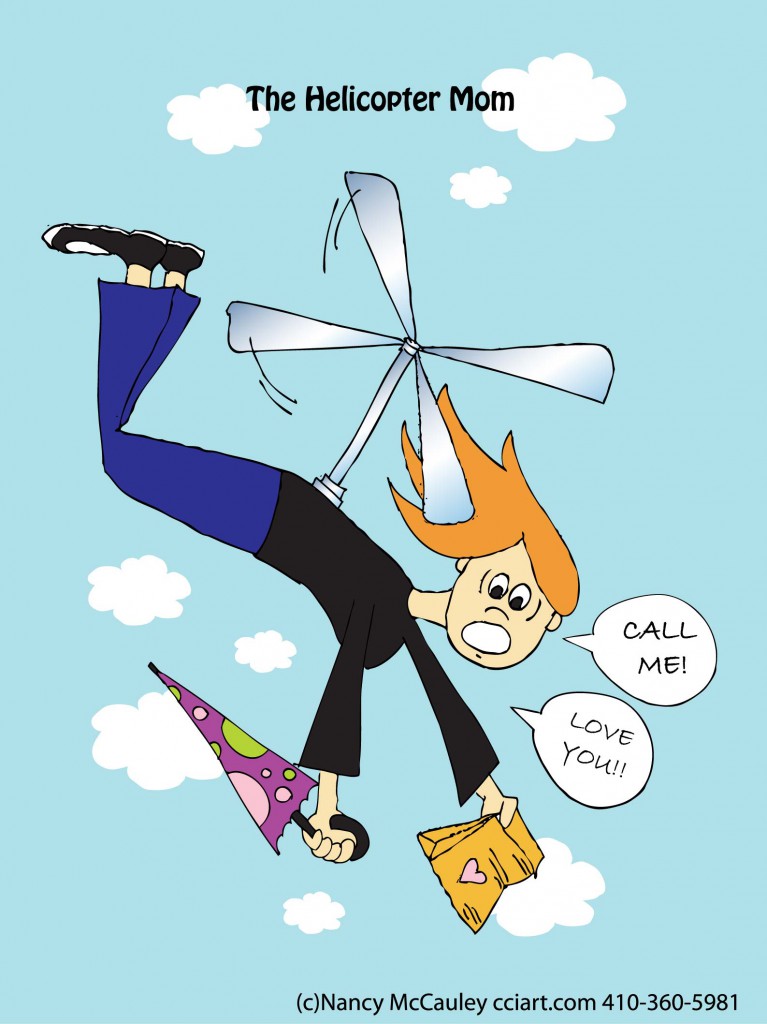 Nowadays, such benign neglect would be seen as not just Sh*tty but Super-Sh*tty, but I look at it another way. What we were raised to be was responsible and independent. And that resonated in a profound way once I became a mom. I realized that not only can I not make every other kid like or understand my own, but that I could not and should not try not to leap up to fix every boo-boo, because not every boo-boo can be fixed by you, and your kids need to figure that out on their own.

So I think of that fake cigarette and Cruella get-up sometimes when we’re walking our dog, Derrick. He’s a rescue dog and a little bit nutty, but he loves attention, which is why we asked the groomers to give him a bright fuchsia mohawk. Some people gawp at him and say, “Wow look at that dog. Was he born that way?” (I am not kidding.)

My son, proud child of a Sh*tty Mom, looks at them and smiles. “Absolutely,” he replies, and walks the dog back home.

About Karen Moline and The Sh*tty Mom Authors…

Laurie Kilmartin (@anylaurie16) is an Emmy-nominated writer for CONAN on TBS, and, as a stand-up comedian, has appeared on CONAN, Last Comic Standing, Jimmy Kimmel Live, and Comedy Central. She lives in Los Angeles with her son.

Karen Moline (@karenmoline) is a journalist and author who has written more than two dozen nonfiction books, as well as two bestselling novels. Karen and her son live in New York City.

Alicia Ybarbo (@aliciaybarbo, @todaysmoms) is a five-time Emmy award–winning producer. She has worked on NBC’s TODAY show since 2000. She lives in New York City with her husband and two children.

Mary Ann Zoellner (@todaysmoms) is a four-time Emmy award–winning producer and has worked at NBC news for 16 years. She lives in New York City with her husband and two daughters. 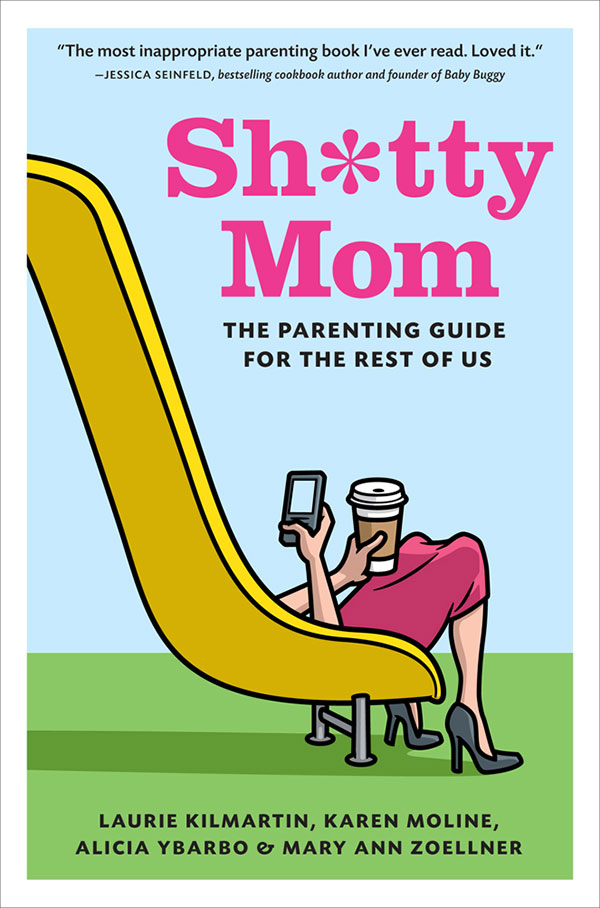 For more about Sh*tty Mom:  The Parenting Guide For The Rest Of Us , go to www.shttymom.com, Like them on Facebook at www.facebook.com/ShttyMom, and tweet at @shttymom.

Tell us are you a Sh*tty Mom? Share some of your Sh*tty mom moments- misery loves company. 😉

Oh What A Night…