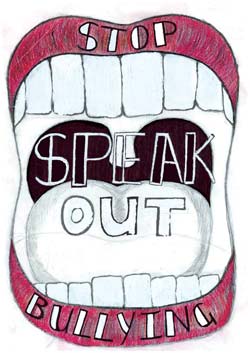 I am certain most of you have heard of the recent teenage suicides over the past month. A horrific number. In Houston , Texas an eighth-grade 13 year old boy shot himself in the head after enduring what his mother and stepfather say was consistent harassment from four other students at Hamilton Middle School in the Cypress-Fairbanks Independent School District.

In New York a Rutgers University freshman killed himself by jumping off the George Washington Bridge . Tyler Clementi, 18 was humiliated when a roommate secretly recorded him making out with another male student and live-streamed the video to the Internet.

Seth Walsh, a 13-year-old student from Tehachapi , CA hanged himself from a tree in his back yard after years of being bullied, after nine days on life support he died. Family members confirmed that he was being bullied because he was gay.

Billy Lucas, a 15-year-old freshman at Greensburg High School in Indiana , hanged himself after enduring bullying torment from his peers — just a few weeks into the school year. His mother found her son, hanging, in their barn. On Billy’s Facebook web memorial, he’s remembered with comments like, “Everyone made fun of him.” At least one former student says he made administrators aware of his own LGBT (Lesbian, gay, bisexual, transgender) bullying, and they did nothing.

Just two days ago, another gay teen committed suicide. Raymond Chase, 19, a sophomore in a culinary arts school hanged himself in his dorm room. Raymond was from Monticello , NY (http://gltnewsnow.com).

We can say we have an epidemic on our hands.

Many of you have asked me about my stance on this matter. While we need to make help available everywhere in our schools and communities, and to teach our children tolerance, I think as parents, it’s our responsibility to take it one step further.

If your child is the victim of bullying, here are a few websites as resources:

How do you propose we help our children stand up to bullying? I’d love to know how you are dealing with this issue with your children and in your communities. One thing is for certain– suicide is never the answer.