Here I am, 4.30pm on a Wednesday afternoon, 32 years of age and propping up a bar in Stamford, CT. I look around and there’s plenty of men, doing the same as me, drinking alone, yet I’m the one getting the ‘what’s your story’ looks.

Before you judge me let me explain why I’m here.

Five weeks ago on Friday, I became an expat. I moved from my home of London, England to Connecticut. The catalyst for the move? My husband’s job. He has worked for the same company for seven years and they recently offered him a transfer to the US.

It was an option first put on the table about 18 months ago. At that point, we’d been dating for two and half years, we were good together but still not talking marriage. It took us just over a year to come to the decision that the move was a good idea. We went back and forth, made lists about the pros and cons, spoke to family, friends, pretty much anyone who would listen, about whether it was a good idea to pack up everything we know and move half way across the world. Eventually, after some gentle persuasion from a friend of mine who has loved the States for a lifetime, we made the decision to grab the opportunity and live it! We got married in February of this year, and moved early May.

The decision we made many months ago is now a reality.

Well, my husband leaves for work somewhere between 7 and 8am and arrives home about 7pm. That gives me about 12 hours a day, 5 days a week that I need to fill with entertainment. Before you ask, no I’m not a kept woman. I want to work and my visa allows me to do so, but I have to wait around three months for the CT government to process it. This means I am officially a free woman, albeit with limited funds, until the permit lands on our doormat.

In the last four and half weeks, I’ve learned how to drive on the other side of the road, navigate my way around my local area, where the great (and not so great) places are for coffee, cake, food, and pretty much anything else going. I’ve learned where to shop; where to drink, and that my sense of humor is definitely not transferable from the UK to the US. I’ve, well, I’ve sort of settled into hot, humid life in CT.

I’ve read, written, walked, seen, drove, shopped and looked at art. I’ve joined meet-up groups (something that every expat site you visit suggests you do), and so far I’ve found nothing more than speed dating sessions to attend in my area.

So today, in 30-degree heat, after taking over 200 photographs in an attempt to entertain myself, I got fed up and hit the pub. I’m on beer number two and honestly it tastes pretty good. I’m not a big drinker, by any means. I like a beer or two here and there, and in the last 5 weeks of being here, I’ve had no more than 8-10 alcoholic beverages. That’s no lie. We’ve had so much to organize that going out for a drink just hasn’t been on the agenda.

But, to answer to my initial question, I do think there are times when it’s okay for a woman to drink alone a bar, and I think this is one of them. I also believe though, that there is a stigma attached to a woman drinking alone in a bar. Or even eating alone at a restaurant, as another example.

Now my other question is, why is that?

What is it about our society that attaches a stigma or makes us think, ‘What’s wrong with her’ if she’s out at a bar by herself, or a movie by herself, or having a cup of coffee alone at a café?

Women should be inspired to do whatever feels right for them, whenever it feels right. We should never let society’s views dictate decisions we make for ourselves. And I’m not on the fence about that. You want to drink a beer alone at a bar? Do it. (Of course, drink sensibly, and if you even think you may have an alcohol problem, seek help). If not, do it, enjoy it, and ignore the judgers. You deserve to be there as much as the next person, especially if you’re a lonely expat. 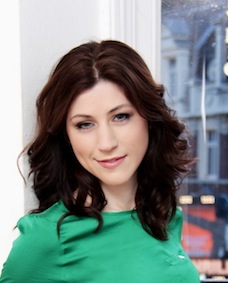 Rebecca Longman is the owner and founder of a people development consultancy, and a creative writer. She recently moved from London, England to Stamford, CT and is now embarking on a three-year expat programme with her husband. You can follow her expat journey at her blog City Girl Walking adoptedlondoner.me where she shares the sights, smells and sounds she experiences as she explores the world.  You can also find her on Twitter @LittleBWriting or @rsg_consult.

I’d love to hear your thoughts on this topic. Do spend a lot of time alone? Are you COMFORTABLE going places alone? Do you think there’s something wrong with a married woman drinking alone at a bar? I’d really love to start this discussion…

Happy weekend, and if you have that drink, DRINK RESPONSIBLY.

Wordy Wednesday: We Want It All!