I came upon this story while I was on vacation. Actually, I remember the exact moment… I had just finished swimming in the lake with the boys.  I opened my Blackberry and there in my inbox, a friend of mine had sent me the story of Leah Siegel. It moved me to tears, and although it’s a very tough one to read, I want to share her story. I blogged about it today to make you think about your own life, your values, and which direction you want to go. I want today’s Blog post to be interactive. I want to know your take. Stay with me ’till the end….

The Headline read:  “Cancer victim tried to pack a lifetime of mothering into two years”

Here are a few excerpts:

“She tried to fill their minds with beautiful memories, of princess parties and water slide rides, pancakes at IHOP on Sunday mornings.

She longed to wrap her three children in a protective spell. She knew what was coming would leave a part of them forever empty.

That is why she fought so hard, enduring the blood transfusions and chemical burns and painful sores. She was haunted by the idea that her children would grow up without any memory of her.

But here, on this summer morning, Leah Siegel knew she was running out of time. As her husband walked into the bedroom, she spoke to him softly.

He crawled into bed beside her, and they were quiet.

From the moment doctors told Leah she had breast cancer in 2008 – stage four, “treatable but not curable” – she worried most about leaving her children, Teagan, then 4; Wyatt, almost 2; and Oliver, 3 weeks old.

“I just need 10 years,” she told her oncologist.

Leah, then 41, was diagnosed just days after giving birth to Oliver. The cancer already had spread to her liver and bones. Doctors gave her two to three years. 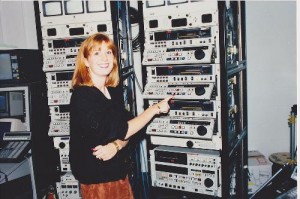 She quit her job as a sports producer with ESPN , where she had earned three Emmys, and began a crushing regimen of doctors’ appointments and chemotherapy. This while feeding newborn Oliver every three hours, answering endless questions about Sleeping Beauty, and defusing arguments over the Lightning McQueen sippy cup.

Weeks after Leah’s diagnosis, her head bald, her body frail, she sat on her couch, cradling baby Oliver in her arms.

“It breaks my heart that they may not get to know me,” she said.

She looked down at Oliver and sobbed.

“That’s half the reason I keep fighting, damn it. I’m going to stay alive long enough for them to have some kind of memory of me.

“It doesn’t have to be a big moment. Eating grilled cheeses together, coloring chalk on the sidewalk – I don’t care what it is. Just something …” 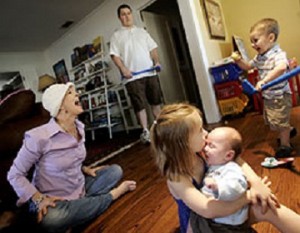 Leah told doctors she would try any treatment, no matter the side effects, no matter how hard.

She started writing as a way to keep family and friends informed. She wrote about Teagan’s continued love of princesses, and how she turned every backyard stick into a magic wand. She wrote about how Wyatt learned to ride a bicycle, then moved on to riding Gracie, the family’s 50-pound Doberman mix.

As she wrote, Leah couldn’t help thinking … I’ll have my memories. But will they have theirs?

By this past spring, Leah began to panic.

“Nothing is working,” she cried to her childhood best friend.

Now it was the family’s turn to say goodbye.

One after another, relatives filled into the room, sat beside Leah’s bed, talked, laughed, reminisced. Then they shuffled out with a nod or a wave, leaving the heavy hospital door to swing shut behind them.

Leah’s mother, Myra MacPherson, sat at the end of her daughter’s bed. She was nervous, worried that she might say the wrong thing.

They started talking about Leah’s husband, how tender he had been.

“I never knew that kind of love could exist,” Leah told her mother.

MacPherson tried not to cry, but tears came.

“Oh, Mom, you can’t help that,” she replied gently. MacPherson bent over and kissed her daughter on the forehead.

As MacPherson walked out of the room, her shoulders shook with sobs.

A few days after her initial goodbye, Teagan asked to see her mother again.

Her father was conflicted. Leah, heavily sedated, sometimes breathed with difficulty and moaned. He didn’t want to keep mother and daughter away from each other, but he didn’t want to frighten Teagan, either.

Finally, he decided to let her visit.

Teagan stepped into the room and saw her mother lying in bed, tubes taped to her arms, machines beeping behind her.

She walked over and climbed into her mother’s limp arms. “I love you, Mommy,” she whispered. Leah lay quietly, her eyes closed.

Teagan lingered in the room for about 20 minutes. Beside her mother’s bed, family photographs flashed across a digital frame. It caught Teagan’s attention. She walked over and began to narrate the images.

“That’s me wearing the dress that Grandma Myra bought me.”

The pictures kept coming, and she described them one by one.

It was as if Teagan was telling her mother, I remember. I remember … 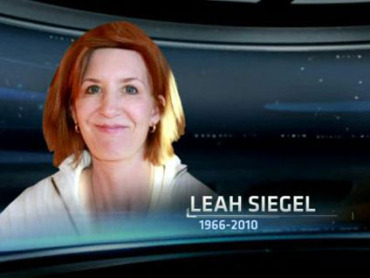 Now that I have your attention, how does this story make you feel?

I’m going to take you down a different path. You see, this is where I sit on the fence. When I read Leah’s story, and unfortunately so many similar stories, it reminds me to live for today. To live in the moment. To let my house get messy, because spending time and making memories with my children are what’s important. It makes me want to swing for that massage or extra vacation, because you can’t take those things, those memories with you when you’re 6 feet underground. BUT, if you only live for today, and don’t live with a sense of responsibility and mindfulness, how will you enjoy the fruits of the labor in years to come? There has to be some planning and living for tomorrow involved. There is such a fine balance. One that I feel I still haven’t mastered.

Live for today? Or live for tomorrow? I’m on the fence.

What are your thoughts?

One things is for certain– tonight I will hold my children extra close, and pray for my family’s well being. Life is fragile.