“What they did was unforgivable”….. “They have to apologize first” ….. “They ruined my life”……

Do any of these statements sound familiar as words you’ve once uttered?   My blog today is about the power of forgiveness, a force so strong that it will release the negative energy that weighs you down and leave you feeling lighter and freer.  Forgiveness is one of the best gifts that you can give yourself and I am going to explain to you why.

Firstly, I would like to say that this Blog post came to be after receiving numerous emails asking me to cover forgiveness and grudge holding. Can we forgive someone who did something so terrible to us, and should we then continue to hold a grudge?   My degree is in psychology, but I am no psychologist,  so I interviewed a professional to help deliver the proper message to you ladies.

I would like to share with you what I viewed on TV Friday night that completely captivated me. I love 20/20 (on ABC) Friday nights, so by the end of the week, if I’m still awake by 10pm, I tune in. This past Friday night showed a horribly disturbing story of a woman, Johanna Orozco, and her relationship with her boyfriend, Juan Ruiz Jr., whose obsession with her not only ended their teenage love affair, it almost ended her life. After raping Johanna when she had finally mustered up the courage to break up with him, he then snuck out of his house (he was under house arrest at the time for the rape), and waited for her to come home. When she arrived, he then shot her point at blank range, and shattered the whole lower half of her face. She barely survived, and lost the entire bottom of her face: her mouth, her lips, her jaw, her chin. After many surgeries, and lips and chin and jaw reconstruction, she was able to finally eat and talk again.

What struck me as incredible when you watched this woman being interviewed, was her spirit. She holds no grudges, she has no regrets, and most fascinating, SHE FORGIVES Juan for almost killing her. She forgives him. She speaks of her two choices: she could carry a grudge and hate, or she could forgive. She chose the latter. I know many of you wonder why.

The literature indicates that holding a grudge is equivalent to you taking the poison and waiting for the other person to die. What is a powerful concept, is that we drag our emotional state around with us wherever we go. So, if you are dragging anger, hurt and resentment, then this is who you become. How sad for us. 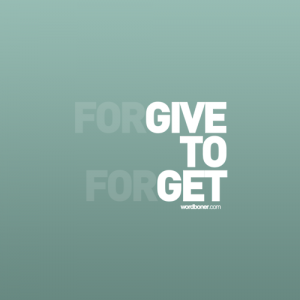 So how does someone like Johanna find the strength to forgive Juan? I have seen this many times. I watched another incredible interview on Oprah of how a girl witnessed her uncle kill her parents as a young girl, and after all these years, now a woman in her twenties, she doesn’t hate him. She offered him forgiveness as he sits on death row. Let me explain, that to finally find this place of forgiveness for heinous crimes such as these, takes years of therapy to heal the wounds. But the point is, these people have discovered that hate weighs them down, and forgiveness frees them. Staying attached to the hate only leads to more suffering. That is why these women chose to forgive. For their own well being.

Now, self forgiveness is an entirely different topic, and a tricky place to sit. Visualize for a moment the sensation of how wonderful you would feel if you stopped burdening yourself with thoughts of what you “should have” done, and just accepted that things happen for a reason, that we are human and make mistakes, and that we must move forward. You’d stop beating yourself up. Ahh…..a sigh of relief! It is important to learn from our past failures and be thankful for the lesson. There are no mistakes, only opportunities for growth.

So as you decide if you are going to hate the husband who cheated on you, or hate your boss, or despise your friend for betraying your trust, maybe you’ll think twice before carrying around all that hate. Allow forgiveness to be part of your daily routine. Remember, we forgive to enable ourselves to heal, and not for the other person. And as a side note, for the person you wronged, it’s never too late to call them up and offer your forgiveness. It is truly the road to freedom!!

Tell our readers, do you think forgiveness is necessary to move on with our lives? Do you have any examples?

Off The Fence and Out Of The Closet