I’m baaaack ladies! As you all know, I had my girl’s getaway last week, and then totally checked out over the weekend to spend some quality time with family and friends. So, it’s Monday morning, I got my ass back to the gym (thank god), and I’m now I’m in my office, with my coffee, recalling some of my funniest moments of the past few years.

And while I know my trip to NYC isn’t very “on the fence,” it did take me three years to get off the fence and book it, so I’d love to share some funny moments and highlights. 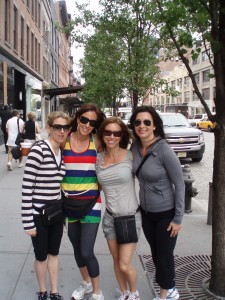 Four moms of 11 children, 4 husbands and 1 dog, took to the skies at 6:45am last Wednesday with a couple of lattes, a few Oprah mags, and some big smiles. We were EXCITED. We were only going to New York City for two nights and three full days, so we had to make each moment count.

I would also like to say that I have been given the green light to tell my story by the three girls. Of course no names will be revealed.

Here were some moments:

As you saw, we met Brooke Shields in Soho. Actually, I kinda shouted at her, WHILE SHE WAS TALKING ON HER CELL PHONE, and then she hung up, stopped to chit chat, and of course pose for a photo. She was completely natural, beautiful, and lovely in person. I told her about the whole Blogging concept of Wordless Wednesday, and seeming that it was Wednesday, she was excited to oblige. Great lady. 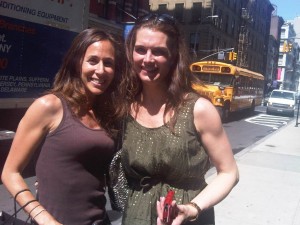 We continued on our adventure, but I left the group in the afternoon to attend a meeting in Midtown. On my way, my taxi driver smashed into a Mercedes. Great, f&ck! The guy came flying out of his car, and my cab driver and this man were exchanging words that Howard Stern would even find offensive. I was shaking in the car firstly because of the accident, but then shaking that someone was going to get killed. It was Hindu vs. Italian and I couldn’t figure out who would win this fight (hopefully Hindu so I could get to my meeting!) But, anyhow, thankfully Mr. Mercedes sped off, and I made it to my meeting, only 5 minutes late. In the meantime, the cab was so hot in the back, that I jumped into the front seat and blasted the broken AC.  I was a visible wreck coming into my meeting. Sexy.

After my meeting, I headed to Victoria Secret to buy a few bras, and snapped a few photos of myself in the dressing room to send to my hubby. He was thrilled.

I had drinks with my amazing New York family on the rooftop terrace of my Hotel, but not before sunbathing on the rooftop pool at around 4PM. We watched a bunch of guys make out in the pool while my girls were having some cocktails. It was 100 degrees, we were in bathing suits, sitting at our rooftop hotel pool in NY. It was awesome.

Somewhere along the way, I discovered one of my friends love “dirty animale” sex, as she calls it, meaning, she loves sex upon wake up. No shower. Teeth unbrushed. She finds it hot. Me, not so much. But I love her anyway. I also got a gage as to how many times a week everyone “does it” and I mean ALL OF IT. Was interesting. NOT sharing!

While in Time’s Square, I chatted again with another personality, Rabbi Shmuley Boteach. He was very nice. And although I was once a big follower of his (remember Kosher Sex), I now have mixed emotions about him. I think he became very Hollywood, too commercial and a little bit of a sell-out (think Michael Jackson). Nevertheless, as you can see in the photo, respecting his Jewish Orthodox religion, I didn’t shake his hand, nor touch him. Here we are: me shoulders-exposed Jew, next to Rabbi. I look a little constipated. 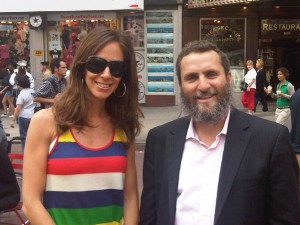 While in Time’s Square,  we hussled some guy off the street to buy tickets to the play Hair. And while the play was comme-ci comme-ça, Ace Young, American Idol finalist and star of the play, was smokin! And the entire cast got fully naked just before intermission… full-out penises and vaginas. A little nuts. But the highlight was that my girlfriends and I all had the chance to hug the very hot and sweaty Ace Young. When the show ended, the cast members ran into the audience. He hugged all four of us and thanked us for coming. First hug from a strange man in 15 years. I cringed to be honest. Swear. I’m not used to hot and sweaty men hugging me. I felt embarrassed. Swear, scouts honor. I’m a goodie goodie. On the fence question here ladies: How would you feel if this body hugged you? 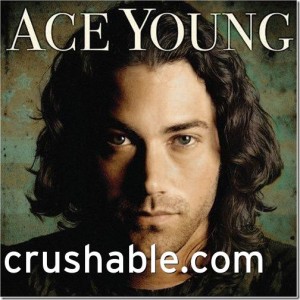 After the play, we got to dinner at 11:30 across the street from our hotel at a great place called Pastisse. Of course men flocked to 4 single women. Not tooting our own horns, cuz really, any single guy would flock to my friends. They’re all pretty hot. But the line of the night was one guy looked at my friend and said, “How will I find you,” to which I think she replied, “You won’t.” Anyhow, despite these annoying guys sitting next to us, dinner ended at 1:15am, and we went back to our rooftop hotel which became a nightclub and we danced till almost 3am. Yes ladies, I finally danced! Only, again, when the men danced nearby, I cringed and looked away. Again, goodie goodie.

Slept in till almost 10Am the next morning. Haven’t done that in again, about 15 years. And then re-discovered my love for non-fat Greek yogurt, with granola and mixed fruits. It’s now my everyday breakfast and I’m stickin’ to it.

I went to a store called ShoeGasm on our way out and bought a great pair of wedges.

Then we all agreed that upon our our return home to Montreal, we had to give our husbands sex. They had been with the kids for 3 days, and as one of my friends put it, “It’s like birthday sex. You just have to do it.”

And that’s how our trip ended. We hugged and kissed each other goodbye, and promised we’d do it again next year.