There’s a very old saying: “Every time a marriage takes place, a new world is created.”

In 2012, does this sound impossibly quaint? Does it sound naïvely romantic?

We all know about the odds for divorce today. We’ve seen how little the marriage vows can mean in the Kardashian Age. Indeed, a recent Pew Research poll shows that 39 percent of Americans now believe marriage is becoming “obsolete.” That’s up from 28 percent who felt that way in 1979.

And yet, at a small-town bridal shop in the American Midwest, I found reasons for hope.

As a journalist and the father of three girls, I set out last year to write a nonfiction book reflecting on the love we all wish for our daughters. I recognized that I needed a place to set the book, a place with great emotion. I considered many possibilities. Maybe I’d visit maternity wards, dance studios, daddy-daughter date nights, or spas where mothers and daughters go to bond. But then my wife suggested I find a bridal shop. Maybe that would be a place to set my story.

“There’s something about a wedding dress…” she said. 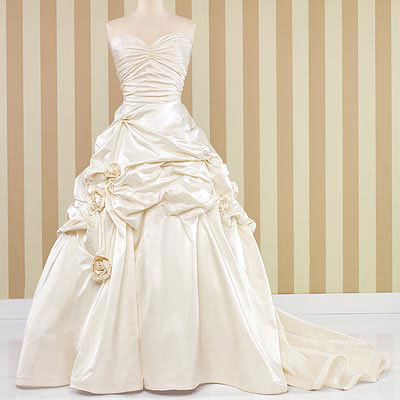 Fowler is home to Becker’s Bridal, a 77-year-old institution on Main Street. It’s been run for all those years by the same family – a great-grandmother, grandmother, mother and daughter. 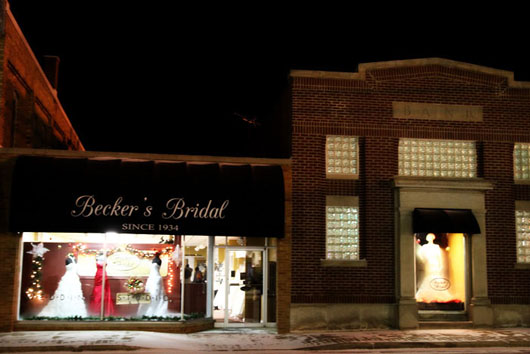 The store is housed in a stone structure that was once a bank, and since 1934, more than 100,000 brides have made a pilgrimage here. After they select the dress they think might be “the one,” they’re invited to step inside what used to be the old bank vault. A ten-foot-by-eight-foot space with mirrors designed to carry a bride’s image into infinity, it’s called “The Magic Room,” and with good reason. Brides and their parents routinely melt into tears there, as they reflect on all the moments that led them to that dress, that room, that moment.

And so I set out to write a book about the brides who’ve stepped into that special space. I came to Fowler not just to write about wedding gowns and what they represent. I came to understand the women wearing them, their fears and yearnings, and through them, tell a larger story about the love between parents and daughters today.

We live in an age when TV reality shows – Say Yes to the Dress, Bridezillas – have drawn attention by showcasing the frenzied pursuit of the wedding dress. These programs are often framed like sporting events, with brides bickering and dickering toward a finished line marked by their selection of a dress.

Some of this goes on at Becker’s, too, of course.  But I resolved to pay less attention to brides I met whose motives seemed somewhat frivolous, the ones more focused on their dresses than their upcoming marriages. Instead I wanted to find brides whose paths here were not necessarily easy, but who have given great thought to the love that guides and connects them.

I wanted to illuminate the most poignant aspects of a woman’s journey to the altar. The stories I share in my book are more than mere tales of brides-to-be – they’re illustrations of the ways in which all parents wish their daughters will go through life safe, happy and surrounded by love. I was reminded of the challenges young women face, of the ways in which sadness is so often intertwined with joy, and of the sweet possibilities that await them – or that may be beyond their grasp.

I guess I wanted to stand in the Magic Room with these families whose stories touched me the most, and while there, contemplate my feelings for my own daughters.

I learned a lot about bridal-gown shopping, but more about human nature.

Standing in their gowns in the Magic Room, a lot of brides find themselves thinking back to the wisdom shared by their mothers. One bride I met, Danielle, had lost her mother when she was a teenager. She wished her mother could be with her as she shopped for a dress, but she was buoyed by memories of her mother’s best advice.

Danielle’s parents were divorced; her father had been abusive to her mother. “I learned that you have to love yourself first,” her mother had told her. “You have to take care of yourself. You can’t love someone else until you love yourself.”

“I love myself,” Danielle said, and that had strengthened her love for her fiancé.

In the Magic Room, I also met Erika, a fresh-faced young bride who is a throwback to another time. As a child, she had vowed to save her first kiss for the man she’d marry. She kept this promise, as did her three sisters.

About 7 percent of the brides searching for gowns at Becker’s are pregnant. Another 25 percent of first-time brides already have children. And so, given the state of the unions today, I was very taken with the romantic Hansen sisters, each of whom had embraced the beauty in an uncommon patience. The choice is not for everyone, of course, but all of them found loving men who were willing to wait for something special.

My time at Becker’s actually left me feeling optimistic. Yes, many of the brides I met will end up in marriages that won’t last. But I also saw a great deal of hope and love in that store. Indeed, I saw the genesis of many new worlds being created. 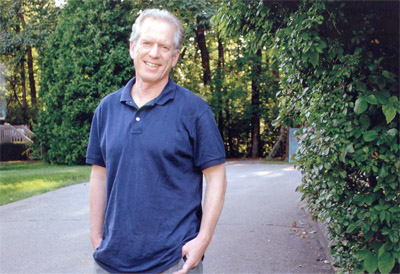 Through his Wall Street Journal column and bestselling books, Jeffrey Zaslow has told the stories of some of the most inspirational people of our time.

The Last Lecture, written by Randy Pausch and Jeffrey Zaslow, has been translated into 48 languages, and was #1 on best-seller lists worldwide. Five million copies have been sold in English alone, and the book has remained on The New York Times best-seller list for more than 112 weeks.

In 2011, Jeff collaborated with Rep. Gabrielle Giffords and her husband, veteran astronaut Mark Kelly, on their memoir, GABBY: A Story of Courage and Hope. The book was launched with a cover story in People magazine, and an hour-long ABC TV special hosted by Diane Sawyer. GABBY debuted near the top of the New York Times bestseller lists for both hardcovers and e-books.

Jeff’s 2009 book about female friendship, The Girls From Ames, spent 26 weeks on The New York Times list, rising to #3. People magazine named it one of the “Ten Best Books of the Year.” Lifetime Television is adapting the book for a movie.

Also in 2009, Jeff coauthored Highest Duty, the memoir of Capt. “Sully” Sullenberger, who famously landed US Airways Flight 1549 in the Hudson River. Highest Duty debuted at # 3 on The New York Times list.

Jeff’s latest book, The Magic Room: A Story About the Love We Wish for our Daughters, discussed above, was just published in January 2012. The nonfiction narrative is set at a small-town Michigan bridal shop, and looks at the lives of a handful of brides (and their parents) who’ve journeyed to the store’s “Magic Room.” 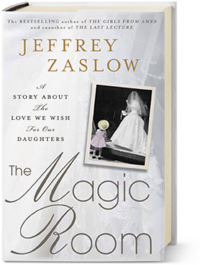 The National Society of Newspaper Columnists twice named him the best columnist in a newspaper with more than 100,000 circulation. In 2008, he received the Distinguished Column Writing Award from the New York Newspaper Publishers Association.

I’d love your thoughts. I was touched by Jeffrey’s story telling, and felt you didn’t only have to have daughters to appreciate the life lessons. What are YOUR memories of your wedding and the months leading up? Have a happy weekend!

Wordless Wednesday: What is SOPA Blackout?