I almost feel like this would be the name of a great blog. Yes, a blog about the musings of a beer drinking, ass-kicking hockey team– you know, HangoversAndHockey.com. But sadly, no. You’re still at WomenOnTheFence.com. It’s still the same me– the same go-getting, inspirational diva, just wrecked after a weekend of over-drinking and over-arena attending. But hey, what would life be like if you ONLY walked a straight line, right? 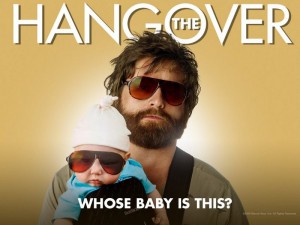 Friday night marked the beginning of a big intercity hockey tournament weekend for my 8 year old son. It was again, another weekend that our family would NOT be skiing, and would not see the light of day. We’re talking 2-3 games per day if the team advances through the rankings. See right there, I’m already starting the weekend a little p-‘d off. The ongoing argument every weekend goes something like this:

My husband – BOYS MUST PLAY HOCKEY.

It’s a battle I see that will be following us for many years to come.

But the team won Friday night. They won Saturday morning. And that meant, they were advancing through the ranks to play Saturday night. Saturday night we had our good friends’ 90th birthday party. Yes, he turned 50, she turned 40, and they celebrated together. Love that. I understood that my husband had to take my son to the game (which was 40 minutes away), and that he would come late to the party.

But what happened while I was there with my girlfriends alone? We were simply congregating around the oyster bar in the back, and before we knew it, someone was pouring oyster shots. Yes, how disgustingly gross does that sound? If you read this blog, you know, I love my one glass of Cabernet. If I’m feeling wild, I’ll go for another half a glass. But somehow, some waiter or husband saw seven yummy mummies standing around chatting , and decided we needed straight vodka shots with a little slimy oyster at the bottom of the glass. I cringed, but figured I’d try. At this point, I’d already had a glass of wine in me.

Three shots later, I was feeling goooood. Like, really good. Understand, I NEVER drink vodka. I never drink anything beyond wine. So, on an empty stomach, this 5’8”,  117 pounds body was doing…. well…. you know… not very well.

My husband arrived, and we had a great time. I didn’t drink anything else the rest of the night. I started to come back into my body around 10pm, and was like, “Gee, I’m fine.”

I woke up Sunday morning, and was like, “Gee, I’m still fine. Fantastic!” My hubby left early with my son for his hockey game. The team had won their Saturday night game too, and were advancing to the semi-finals on Sunday. But then, driving to the game with my little one, I started to sweat. Sweat like you’ve never seen. And I started to get nauseous. REALLY nauseous. Desperate, I ate the banana bread in my purse that was there for MY SON. I admit, not my finest moment.

I walked into the dressing room with my sunglasses on my husband took one look at me and said “What the hell is up with you? There are kids here.” Well, I was officially hungover.  For first time since college. And it wasn’t pretty. One of the dad’s looked at me and so nicely offered some great advice, “Go get a hot dog and fries. The grease will absorb the alcohol.” Oy, I was officially busted. 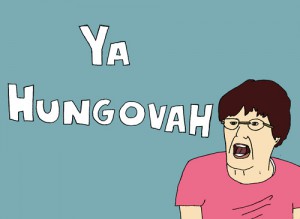 I then walked into the arena to watch the game. My parents, father in law and hubby followed, and we watched the team lose 2-0. They were crushed. They were out of the tournament. My son had also been given a penalty in the first period, and the other team had scored while he was in the penalty box. He was in the dressing room trying to hold it together, but the tears they were a’ comin’. I sat next to him, but he didn’t speak. He just covered his eyes with his jersey. I sat quietly next to him, not saying a word. I just rubbed his back.

So, why a blog about hockey and hangovers you might ask?

Because, there were lessons to be learned after a weekend spent nauseated at an arena. In the process I realized a few things:

So, you see. This weekend wasn’t such a bust after all. Alcohol and losing proved to be quite insightful.

I’d love to know what insights you’ve learned lately. Do you think the day you become a mother is the day you have to stop having fun? Aren’t moms allowed to have fun too? Does it make us unfit? I’d love your take.

The Magic Room: A Tale of Six Lives Woven Together