What is this black Wordless image, you might ask?

Well, it’s a representation of many who are shutting down their sites today. Going black.

In fact, if you go to Wikipedia.org right now and attempt to do a search, this is what you’ll find. Crazy wild. 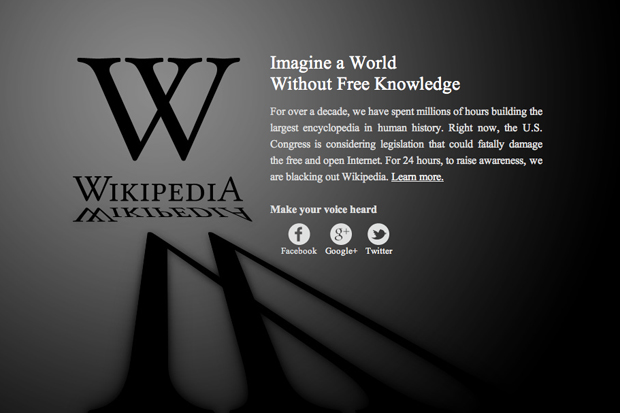 So what is SOPA exactly?

“Thousands of websites, including some of the most popular, are going dark today to protest the Stop Online Piracy Act, a bill which is designed to thwart copyright infringement but that Web experts warn could threaten the functionality of the Internet.

Encyclopedia giant Wikipedia, popular news-sharing site reddit, browser pioneer Mozilla, photo-sharing favorite Twitpic and even ICanHazCheezburger.com are blocking access to content throughout Wednesday, symbolizing what the bill may allow content creators to do to sites they accuse of copyright infringement. Other websites, including Google, are expressing solidarity with the protests by featuring anti-SOPA content on home pages.

The online protests are being joined by a physical demonstration in New York City, where thousands of representatives from the city’s tech industry plan to demonstrate outside the offices of Sens. Chuck Schumer (D-N.Y.) and Kristen Gillibrand (D-N.Y.),co-sponsors of the Senate version of SOPA, beginning at 12:30 p.m. As pressure has mounted, both have expressed willingness to compromise.

SOPA would give both the government and major corporations the power to shut down entire websites accused of copyright infringement with neither a trial nor a traditional court hearing. The legislation is aggressively backed by Hollywood movie studios and major record labels, along with several major news providers, including Fox News and NBC-Universal, which have largely shied away from coverage of the bill. (Huffington Post)

You can watch this video as well, which might explain more.

Check out this woman’s point of view, “I’m horrified that Congress has crafted a law that will screw with the architecture of the internet in ways that will undermine free speech.” – (Blogher.com). Clearly many are outraged.

Today, I’d like to get the conversation going. Are you on the fence? What are your thoughts on this debate? I’d love to hear your reactions.

The Magic Room: A Tale of Six Lives Woven Together