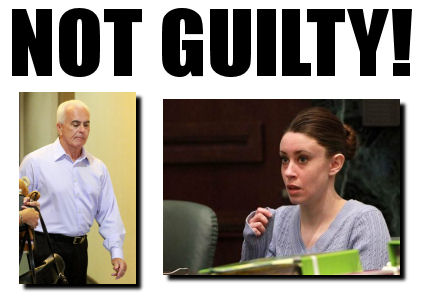 I have two words for you: NOT GUILTY.

I have two more words for you: FUCKING GUILTY.

I have two more words for you: REASONABLE DOUBT.

I have two more words for you: NOONE KNOWS (Okay, that’s really three words).

I, along with the rest of the world watched in horror yesterday as the verdict was delivered: NOT GUILTY. Casey Anthony was found not guilty of killing of her two-year old daughter, Cayley Anthony.

I don’t want to wax on about the case that I have followed since day one, but it was a little bit like OJ Simpson all over again… “If the glove doesn’t fit, you must acquit.”

Give me a break.

The prosecution had a very strong case, but they were still missing the smoking gun, so to speak, that hard evidence with Casey Anthony’s fingerprints written all over it. They just couldn’t bring it home.

And that is where you either love or hate the American system… the prosecution must prove guilt BEYOND a reasonable doubt.  The defense must only cast a shadow of doubt.  The US judicial system states it is better to let fifteen murderers walk free, than to lock up one innocent man. That is the system, plain and simple. And although you may question it, it is in fact, the law.

And although I believe in my heart, that Casey Anthony did kill her daughter, whether accidentally or in a premeditated way, it makes no difference. We the people don’t have that evidence any more than those 12 jurors did. The defense was able to cast that doubt, and therefore by the jury acquitting, one can argue they did their jobs… perfectly. This by no means indicates that the jury believes Casey is innocent, it just means there was not enough evidence to convict.

No one knows what happened to poor baby Caylee, and in my opinion, no one ever will. There is only one person who knows here, and that is Casey Anthony. And at this point, she will never talk.

So before we go off dropping F-bombs, (as I did and worse), despite Casey Anthony’s probable guilt, this is the American system. Remember, this is how it works.

But, I will still leave you with one final thought, since this is my Blog after all: Which mother doesn’t report her child missing for 31 days? Let’s get real, people.

Are you on the fence? What do yout hink happened to baby Caylee Anthony? Do you think Casey Anthony killed her daughter? Was justice served? I’d love your thoughts.

Do The Right Thing