Three thousand years ago on a battlefield in ancient Palestine, a shepherd boy felled a mighty warrior with nothing more than a stone and a sling, and ever since then, the names of David and Goliath have stood for battles between underdogs and giants. David’s victory was improbable and miraculous. He shouldn’t have won.

Or should he have?

In David and Goliath, Malcolm Gladwell challenges how we think about obstacles and disadvantages, offering a new interpretation of what it means to be discriminated against, or cope with a disability, or lose a parent, or attend a mediocre school, or suffer from any number of other apparent setbacks.

Gladwell begins with the real story of what happened between the giant and the shepherd boy those many years ago. From there, David and Goliath examines Northern Ireland’s Troubles, the minds of cancer researchers and civil rights leaders, murder and the high costs of revenge, and the dynamics of successful and unsuccessful classrooms—all to demonstrate how much of what is beautiful and important in the world arises from what looks like suffering and adversity. – David and Goliath, Malcolm Gladwell

For the new WomenOnTheFence® readers: I have often written about Malcolm Gladwell, one of my favorite authors of today. Known as one of the “most brilliant and influential writers of his generation” and labeled a Geek Popstar by The New York Times. Perhaps you have heard of his books The Outliers, The Tipping Point and Blink. He tackles big theories of success and unsuccess, but his scientific-based evidence and research to back up his big theories is what makes him so compelling. When I heard he was coming to speak at my Alma Mater, McGill University in Montreal, I made sure to get my media pass and be there.

Last night, in front of a sold out crowd, Malcolm Gladwell talked about his new book, David and Goliath. And it was in typical Gladwell fashion– understated, quiet, low key, unassuming, and pure genius. I cannot imagine living in his head… you can just feel what a complex individual he is, and how the knowledge in his brain almost torments him. 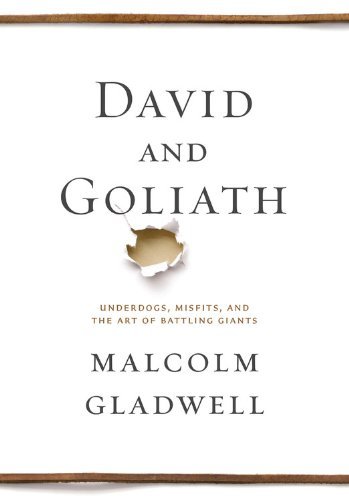 I wanted to share with you a few stories from last night because they are so relevant to us as women, career women, and especially for the mothers raising children.

He talked about the birth of the book David and Goliath stemming from a contradiction he made that bothered him about his previous book, The Outliers. In The Outliers, he writes about what it takes to be highly successful… the law of 10,000 hours, the advantage to those who have access to all the resources, are the oldest, have the best coaching, exposure, and how the advantages follow them year after year, making them stronger than their peers. But in The Outliers, he also spoke of one group– Jewish Lawyers in the 50’s in New York City, who were locked out of the waspy downtown law firms because of their religion. Because these Jewish lawyers were discriminated against, they joined forces together (out of lack of choice), and started handling mergers and acquisitions (m&a’s) — an area of law that no other firm wanted to handle at that time. Because these Jewish lawyers were discriminated against, they joined forces together, and today, m&a’s happen to be one of the most important and lucrative forms of law. These underdogs were forced to create their own opportunities, which in turn ended up giving them the advantage, rather than the disadvantage. And it is this contraction in his book The Outliers, which led to his research of the underdog for David and Goliath.

David and Goliath and The Underdog Advantage

In his book, Gladwell gives the example of a high school girls’ basketball coach and other “Davids” of the world, the underdogs, and how they can actually have a distinct advantage in competition if they focus more on effort than skill. His premise is that underdogs actually win most of the time when they approach the conflict on their own terms, unconstrained by conventional strategies. In other words, sometimes, the underdog wins by simply doing what others would never envision doing. The underdog goes a different route, because they EXPECT to lose. This in turn, gives them the advantage– they are forced to explore unconventional avenues and work harder, which ends up helping them. This has been the story of my life… I have written countless times about always struggling as the underdog.

The Big Fish In a Small Pond

Gladwell spoke of the insufficient number of math and science graduates we are producing today, and the high dropout rate in these programs (50% in the first year). He says students are dropping out NOT because they are not smart enough, but because when compared to their immediate peers in the classroom, if they are at the bottom of their class, they THINK they are not smart enough to make it. Gladwell says we don’t compare ourselves to the average American same-aged person, but rather we compare ourselves to those in our immediate surroundings… our peers, our classmates, our friends.

He claims that you can reach a conclusion that you’re not “good enough,” simply based on comparison to those in your immediately surroundings. “You could have an IQ of 150, but if you’re in the bottom half of your Harvard class, this could lead you to think you’re not smart enough, and therefore you drop out unnecessarily. The drawback is at these elite schools, you are surrounded by brilliant students, and you could draw erroneous conclusions about your own ability. Therefore, it’s a high risk proposition to go to an elite University– it’s being a small fish in a big pond. I would rather see a student excel with excellent grades and feel good about themselves at a lesser known organization where they have the greater chance of standing out, than having the Ivy League factor for prestige.” He recognizes the benefit to being the big fish in a small pond and how it helps you succeed later in life.

Gladwell said there are two characteristics that we see repeatedly in HIGHLY successful people (presidents, entrepreneurs, etc.). Those are: DYSLEXIA and PARENTAL LOSS (loss of at least one parent). Very successful people have high rates of both. They have experienced a very traumatic blow, and have gotten stronger as a result. He calls this desirable difficulty. The loss made them tougher, stronger, and work harder.

BUT, if you look at the complete opposite end of the spectrum, the least successful people in society: prison inmates, drug addicts etc., you also see the highest rates of… get ready… drumroll.. DYSLEXIA and PARENTAL LOSS. As Malcolm Gladwell says, “It’s modular.”

Well, the studies show that too many disadvantages are what cause failure over success. So, if you lost a parent, and are dyslexic, had an abusive parent, had a coach who molested you, grew up in poverty– these are too many disadvantages to recover from. However, if there are fewer disadvantages, coupled with SOMEONE WHO BELIEVES IN YOU, the chance for success is much greater. The uber successful people who suffered parental loss and dyslexia, also had one relative or person in their immediate surroundings who believed in them. I couldn’t believe he said this, because this is my research as well, and I have spoken about it many times.

Ladies, there is so much more to say. He talked about the generational dilemma of children today growing up in privilege who have not had to be the underdog, and therefore won’t learn the lesson of hard work, and won’t know self-reliance like their parents. He also talked about his critics, and said that we all have critics. “You can choose to care and suffer, or you can choose to not care and not suffer. And I have chosen the latter.” Good for you, Malcolm. He also closed by saying that in the 2008 election, Hillary Clinton was the bigger underdog when compared to Obama. Gender politics lag behind racial politics, and he said he finds it puzzling. There has only been one female head of state, and he finds this completely puzzling.

Perhaps the female disadvantage… his next book.

I’d love to get your feedback on Gladwell theories. Perhaps leave me a comment below!