I don’t remember a time when I didn’t love words. As a kid, I consumed books by the dozens, and wrote spiral notebooks-full of my poems and thoughts. What I didn’t understand then was the power of those words, to both elevate and diminish me.

By the time I was 16, I knew I wanted to be a writer. I even looked the high school career counselor straight in the eye, and said the words out loud. “Oh, you’re going to write the great American novel?” she mocked. Then, she advised me to take a typing class, so I could be a secretary. It was obvious she’d had lots of practice stabbing pitchforks into kids’ dreams.

The brutal truth was, nothing she said was worse—or more destructive—than the negative messages I was already telling myself. As I moved through high school and college, studying the beautiful words of Shakespeare, Austen, and Morrison, I became convinced that I could never be talented enough to be a writer. No one makes money writing, I chastised myself. You think you’re going to be the exception?

In essence: Who the hell did I think I was?

Sometime in my 20s, I stopped reading and writing. They died a slow death. I didn’t mourn their passing, or wonder what happened to the girl that used to stay up late, under the covers with a flashlight, to finish a book. She was busy growing up—getting married, starting a family, and constructing a safe, practical career in marketing.

Funny thing about our passions, though, is that they aren’t meek, and they refuse to be suppressed. During one of my first internships, I wrote a movie review for my team that I accidentally sent to the entire company. These lapses of creativity became a recurring theme. There was an ever-present longing just below the surface that made me restless for more.

Then, I went through a layoff, and my discontent turned into depression when I realized that security is an illusion. My husband—who, by this point, had been telling me for over a decade to start writing—did the single most profound thing anyone has ever done for me. He came home one day with a book in his hand. “I think you need to read,” he said.

I was like a wildebeest at a desert watering hole, sucking up books from used bookstores and local libraries. But I didn’t go back to Fitzgerald or Hemingway. I devoured mysteries and romances. Writers who weren’t in the literary cannon, but who were making a living telling stories all the same.

I started writing again, too. Five pages at first, soon 50. At first, old self-destructive habits kicked in, and I buried the files deep inside my hard drive. Then, I had a breakthrough. Instead of asking why I deserved to be a writer, I reframed the question: Why didn’t I deserve to be?

This winter, I finished my first book. I also started a blog about women’s issues. I won’t lie; it was, and is, demanding. I write in the mornings, on the train, at night—whenever I can. My family makes a lot of sacrifices. Mostly, though, I try not to worry about the logistics, because this time I can’t, and won’t, stop writing. How did I go without it this long? Why do any of us freely give away the things we love—that make us who we are?

Wield your words wisely, because they are loaded weapons. I should know, because I used them to derail myself for a very long time.

Here are ways to avoid making the same mistake:

Above all, words are the expression of feelings, so you must believe you deserve to pursue your dreams. Because you do. 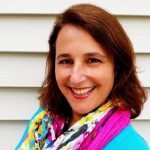 Victoria De La O writes a blog about topical, and sometimes funny, women’s issues at www.victoriadelao.com. She is the author of The Rule of Thirds, the first in a series of New Adult novels. When she’s not trying to get her books published, she works in marketing, and spends time with her husband and two kids.

I loved today’s post, and I hope you do too. A very profound message on doing what we love, finding our way in life, chasing our calling, and manifesting. Please leave Victoria a comment… she will be reading.

And on the 198th Day of the Year, She Rested