Have you ever felt so completely sure of your path, while at the same time feeling like you’re walking on glass?  Twelve years ago, I accepted a job at a women’s medium/maximum security prison as a horticulture teacher. And if you knew me then, you’d know the closest I’d come to prison (or jail for that matter) was a game of Monopoly. In fact, I could have been the spokesperson for the “So Incredibly Naive It’s Painful” campaign.

One day after a long shift working in the gardens, an inmate I’d grown close to stood at the front desk arguing with a guard. M had been incarcerated from age 22 to 37 and was due to be released soon. She needed help adjusting to a world that didn’t tell her when to sleep, when to eat, what to wear. In prison she was allowed 60 items of clothing – socks count as two.

She was preparing to enter a world that didn’t limit how much she wanted to buy, a world that now included the Internet, cell phones. Getting her ready to live in our world again meant regular trips to her home in Toronto, about an hour from the prison.

But that night she was as angry as a hornet in a box. Her ride hadn’t shown up and her trip home was about to be cancelled. M grabbed me and asked if I’d take her… home… please. The prison would give me a car and we’d be back here by midnight. Looking at the hope in her eyes was like looking directly into the sun – I wanted to turn away but I couldn’t.

After talking to the warden and getting my instructions – if she bolts, let her run. If she gets angry, if she has a drink, if she does this or that or anything, call 911. Simple, right?

I called home to tell my husband. To give you an idea what he might have been feeling – M had shot her husband in the face with a hunting rifle – in a crowded bar.

Her parent’s home in Toronto was in a sleepy suburban neighborhood. We spent the evening looking through old photo albums. M learning to ride a bike. M at her first dance. M and her husband on their honeymoon in Jamaica…

And then at end of the evening when M took some time to call old friends, her mother and I sat on the front porch and chatted. “I’m just so thankful she’s alive. We have so much to be thankful for.”

And there it was – 37 years of a life wrapped into one, painfully honest sentence.

The label of murderer will never leave M – she’s the story of all of her stories together. There’s an awful lot of talk about the importance of being your authentic self. But what happens when your authentic self is wrapped into something hurtful and terrible? Where does redemption live?

I’ll tell you where redemption lives – right here – in our hearts. Negativity is a virus and once it catches hold, it can be more damning than a life sentence.

M’s mom taught me an important lesson that night. Where there’s life, there’s hope. And where there is hope, there’s a chance for redemption.

Ever notice how in real life we talk in circles around hard issues? I worked with women who killed their husbands, their children, who broke their mother’s jaw for their next high. People who live in prisons don’t waste time skirting issues to get to what really matters.

During one of my first shifts, I was asked to help dig gardens behind one of the main houses. While most of the prison was under video surveillance, there were some areas outside of that reach – the gardens behind the houses was one of those areas. My position as horticulture teacher was unique from the other people who worked there. I wasn’t a teacher in a classroom with papers to grade, nor was I guard with a weapon. But I was outside of security much of the time and with heavy tools.

That particular day, I was with 5 other women, digging a plot of land for a vegetable garden.

I asked if the cameras could see us. One of them leaned over her shovel and said, “Why, what’s the plan?” And then they all laughed, big belly laughs. I stood there, gobsmacked. Trying not to look as uncomfortable as I felt while they laughed at me.

But if no one could see us, then what if… Eventually one of them leaned over, and slugged me in the arm. Relax Julia, you’re safe with us.

I stayed there and finished the job and then I came back the next day and the next day. I chose to be there. I knew that if I left that day, I’d miss something important.

For some people, walking into a business meeting or networking party can be the same feeling of terror. What if my words are taken out of context? What if someone realizes I don’t know what I’m doing and they call me out on it?

So, what will happen? You won’t lose your house. You won’t get cancer. You won’t get bashed in the head with a shovel by someone who shot her boyfriend in the face with a rifle. You’ll make mistakes, yes. If you’re lucky, you’ll keep coming back and you’ll discover that being here is worth the risk.

My naïve question in a back garden became the start of a long initiation. The women who gave me their time to beautify the gardens also gave me their stories. As we dug gardens and planted flowers and built a gazebo and greenhouse, I listened to them.

I took their stories home with me and slowly, bit by bit, I began to change. I changed because I wanted to be cooler, hipper. I wanted to be more like them so they would like me.

One night as I was finishing up my shift, there was a weird vibe in the air. I couldn’t identify it but the air around me felt heavy, like it does just before a storm. A riot was brewing.

When I arrived for work the next day, the landscape had changed. No one showed up for their shifts. I worked my normal shift in the gardens, which were in the center of all the houses. I thought they might be watching me from their windows but I wasn’t sure.

At that moment, I realized that my friendship had crossed the line. I loved them and wanted to help them but I was not one of them. They knew I wasn’t one of them – that’s why they hadn’t told me about their plans.

I wanted to belong to a community, any community so badly I had misjudged everything. Until that moment, I had forgotten who I was, I had attached importance to all the wrong things.

Ever have that happen to you? You think you’ve made a friend and then something happens and wham…

Two years ago I lost a friend in the earthquake in Haiti – he worked at the UN in Port a Prince and was on Facebook chatting when the earthquake struck. The next minute he was gone. It took 11 days for them to find his body. A couple months later a girlfriend lost her 2 year old son to cancer – 1 month after diagnosis. Every conversation I had with friends became a long, drawn out song of grief, but you know what? My true friends were there for me. I didn’t need to be cooler or hipper. I could be as sad as I needed to be, and it didn’t matter.

What did I truly learn in prison? Be true to yourself and never underestimate the power of your voice. Whether you keep it well protected or flaunt it to the world, your weirdness is my weirdness. We are all weird inside, and being accepted with our weirdness intact is as important as breathing. You shouldn’t have to be something you’re not in order to be loved.

In some ways, working in a prison was my Wizard of Oz moment. I had the power to be myself all along, but I had to try all the wrong paths first to truly find myself. I think Judy Garland said it best, “Always be a first-rate version of yourself, instead of a second-rate version of somebody else.”

Have you ever had a Wizard of Oz moment? I’d love to hear about it below and let’s continue the conversation. 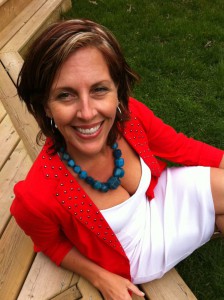 Julia Rosien is the founder and Chief Idea Officer of SocialNorth, a social media strategist firm as well as founder and owner of GoGirlfriend, a travel-based website for women. Julia serves on various Boards of Directors. She is currently the 2013 Chariman for Withit.org, a non-profit organization for women in the home and furnishings industries and Chief Marketing Officer of a startup tech network for women – Women Powering Technology.

Co-founder of Canada’s first 140 Conference and its master of ceremonies as well as a presenter at TEDxWomen Waterloo, Impact99, Tweetstock.ca, Women in Biz Conference to name just a few, Julia is much-requested speaker in a variety of industries. Not surprisingly, she’s been named one of the most influential women in social media and was a nominee for the Roger’s 2011 Women of the Year celebration. Connect with Julia on Twitter, Facebook or LinkedIn.

On Regrets and Going For It… Yah, Getting Off The Fence

Giveaway: Spend an Evening with OPRAH IN MONTREAL!