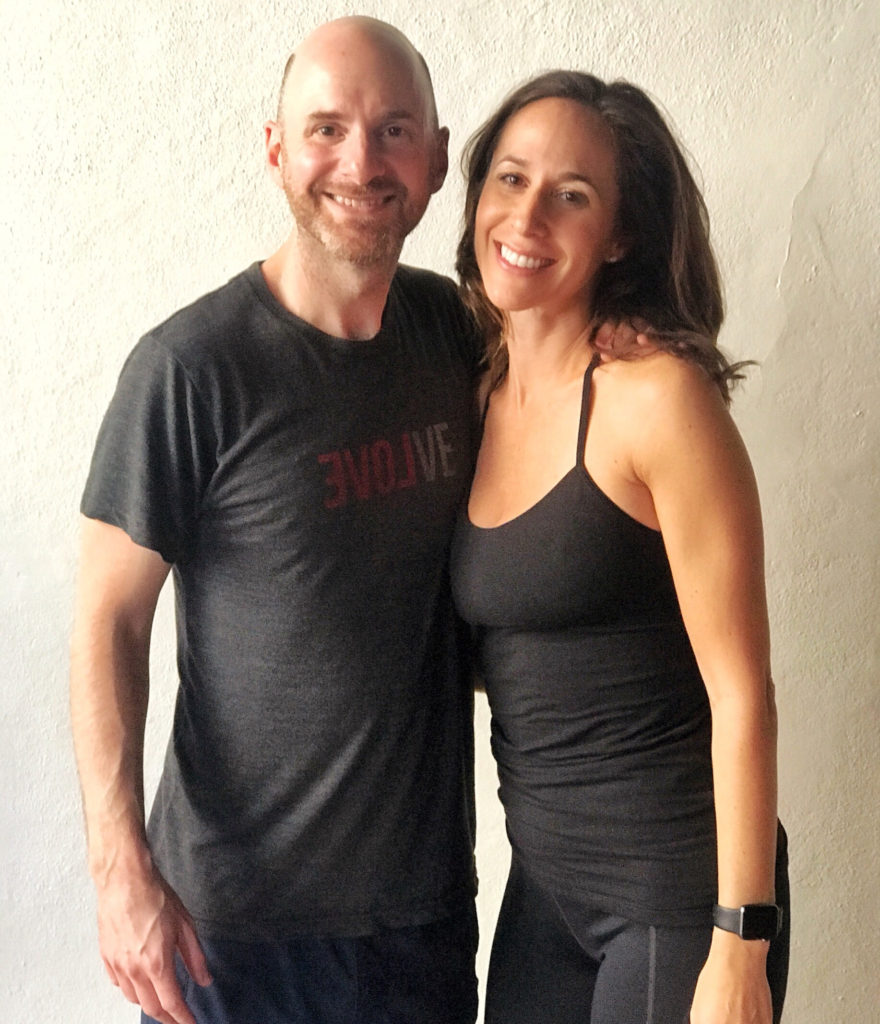 This weekend, I took Saturday afternoon away from my family to attend a yoga, meditation and stress management Masterclass with Bram Levinson. I don’t like leaving Hilly and the kids on the weekends, so in the odd time that I do, I have to make sure it’s for something important. You know– the good ‘ol cost/benefit ratio.

It is my life’s mission to learn and share, and so while it’s all still fresh in my mind from the weekend, I’d like to share some aha moments that woke me up:

* Can you observe more without reacting? THAT is living. Can you observe things that trigger you without immediately reacting? If we say “I am sick,” “I am angry,” then that is what our body becomes. If we can realize it’s a passing state, we can then witness it all. Witness more, react less. Don’t get caught up in the fight.

* Those who realize that both adversity and success comes and goes, are more content. If we don’t stay attached to either, we’ll live happier.

* In the presence of a negative thought, think the opposite. Repeat that line again, ladies. If a negative thought loop is constantly playing in your mind, it will land on your body (in your lower back, or on your shoulders, as examples). If you can change your dialogue to, for example, “It’s not that bad,” your body will begin to feel the different. Change the INTERNAL DIALOGUE with yourself, because it has an effect on the nervous system.

* When you stop being attached to whether something will happen or not, you’re free.

That was a huge moment for me. When you stop being attached to whether something will happen or not, you’re free.

Bram went on to explain that your private logic is your lens of the world, and it exists for you alone. No one else shares it. It’s based on how you were raised, what you experienced and continue to experience. It will tell you certain things are real not, that certain people are good and others not, etc…  It is made up of things that are true, as well as cognitive distortions. A cognitive distortion is an exaggerated or irrational thought pattern. 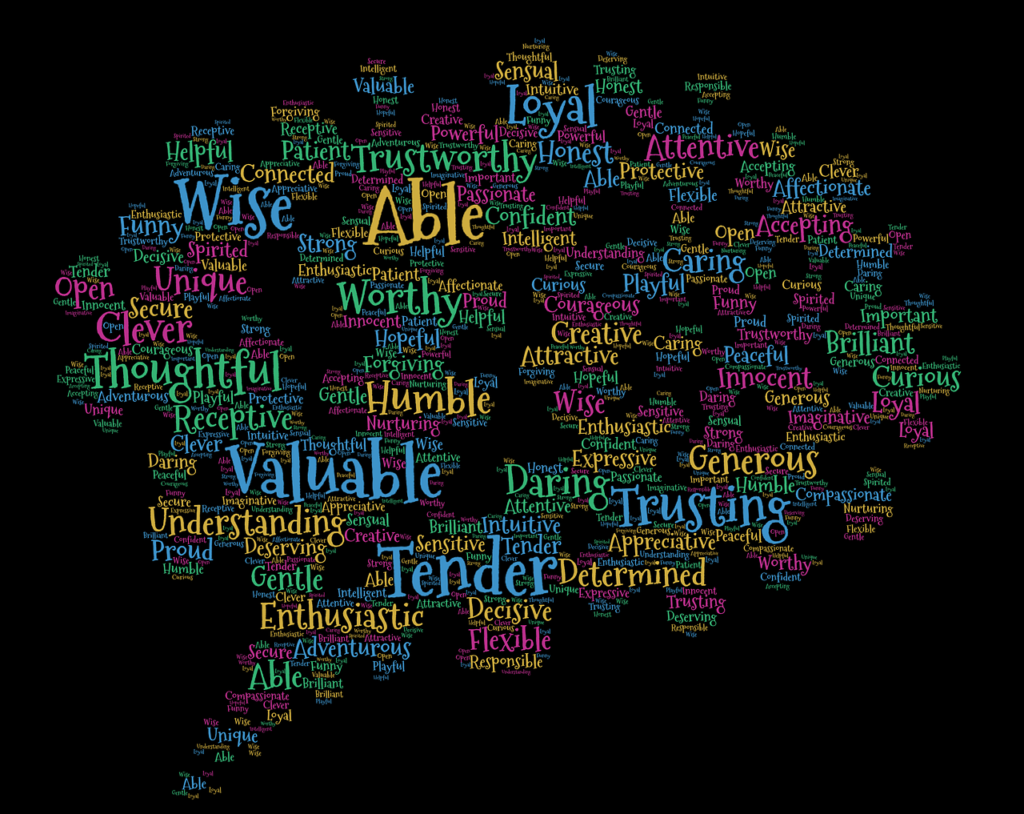 He explained 10 cognitive distortions we experience according to psychology:

Also known as “Black-and-White Thinking,” this distortion manifests as an inability or unwillingness to see shades of gray. In other words, you see things in terms of extremes – something is either fantastic or awful, you are either perfect or a total failure.

This sneaky distortion takes one instance or example and generalizes it to an overall pattern. For example, a student may receive a C on one test and conclude that she is stupid and a failure. Overgeneralizing can lead to overly negative thoughts about oneself and one’s environment based on only one or two experiences.

Similar to overgeneralization, the mental filter distortion focuses on a single negative and excludes all the positive. An example of this distortion is one partner in a romantic relationship dwelling on a single negative comment made by the other partner and viewing the relationship as hopelessly lost, while ignoring the years of positive comments and experiences. The mental filter can foster a negative view of everything around you by focusing only on the negative.

On the flipside, the “Disqualifying the Positive” distortion acknowledges positive experiences but rejects them instead of embracing them. For example, a person who receives a positive review at work might reject the idea that he is a competent employee and attribute the positive review to political correctness or to his boss simply not wanting to talk about his employee’s performance problems. This is an especially malignant distortion since it can facilitate the continuance of negative thought patterns even in the face of lots of evidence to the contrary.

This “Jumping to Conclusions” distortion manifests as the inaccurate belief that we know what another person is thinking. Of course, it is possible to have an idea of what other people are thinking, but this distortion refers to the negative interpretations that we jump to. Seeing a stranger with an unpleasant expression and jumping to the conclusion that she is thinking something negative about you is an instance of this distortion.

A sister distortion to mind reading, fortune telling refers to the tendency to make conclusions and predictions based on little to no evidence and holding them as gospel truth. One example of fortune-telling is a young, single woman predicting that she will never find love or have a committed and happy relationship based only on the fact that she has not found it yet. There is simply no way for her to know how her life will turn out, but she sees this prediction as fact rather than one of several possible outcomes.

This may be one of the most surprising distortions, and it is also one of the most important to identify and address. The logic behind this distortion is not surprising to most people; rather, it is the realization that virtually all of us have bought into this distortion at one time or another. Emotional reasoning refers to the acceptance of one’s emotions as fact. It can be described as “I feel it, therefore it must be true.” Of course, we know this isn’t a reasonable belief, but it is a common one nonetheless.

These tendencies are basically extreme forms of overgeneralization, in which we assign judgments of value to ourselves or to others based on one instance or experience. For example, a student who labels herself as “an utter fool” for failing an assignment is engaging in this distortion, as is the waiter who labels a customer “a grumpy old miser” if he fails to thank the waiter for bringing his food. Mislabeling refers to the application of highly emotional, loaded language when labeling. We too label ourselves and define ourselves by one behaviour (usually negative), and fail to see the positive in ourselves.

There was so much learning, I tried to balance being very much in the moment, while taking notes to pass on the teachings to you.

Thank you Bram and Luna Yoga. I’m glad I invested my time, my money and my energy in myself this weekend. I hope you will do something meaningful for yourself today and every day, no matter how small.

Glenn Harrold: How Meditation and Hypnotherapy Will Change Your Life For The Better